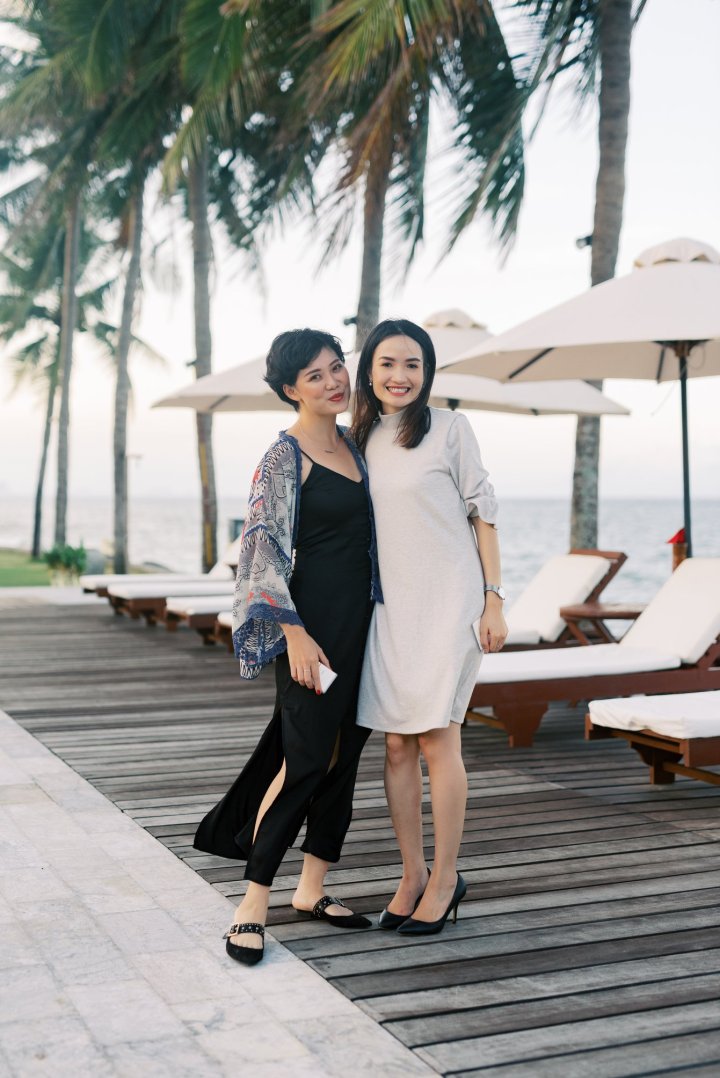 There are times in our lives, we keep wondering why some people are meant for each other in so many ways and what’s the secret behind it? Many people say it’s about the law of attraction, others say it’s destiny and we have some believe in miracles or theory of gravity. Guess what? I believe in everything.

Less than 3 years ago, Jenny and I met over a business opportunity. I was the Director of Sales at Legacy Yen Tu – a member of MGallery Hotel Collection, and Jenny has always been, ever since, one of a kind wedding celebrity in Vietnam. I have heard of her for quite some time and we finally met. It took us several occasions to meet, we are both Northern Vietnamese, we used to live in the same city, but it seems so clear to me that we will meet, wherever we want to meet: Hanoi, Yen Tu, Da Nang, Hoi An, Ho Chi Minh City and what I can be sure of, the list will definitely get longer.

Why did WE decide to work together?

God knows. No words can describe how happy I am to get to meet this determined young and talented woman who has a vision, which is to place Vietnam into the world map for destination wedding. Though we are two very different persons but deep inside, she carries her story of the-soft-seed-princess (hatmem.com) and I find myself as a another type of princess who lives in this world with a soft heart.

We do what we love and we don’t know out limits. We meant it.

I have achieved what I have today – not necessarily what I wanted nor what I planned but I simply know that I could do it and I could even go further if I really wanted to achieve more. But I know I never really had to try too hard. You keep doing what you love and keep your playful spirit alive – believing in what you think is right and you keep breaking your own records.

We are overly sensitive

I guess it’s a combination of both: women’s instincts and career intuition. We both work in events and service industry which requires us to be ‘overly sensitive’ at times. She could easily tell whether something is going on just by the look of my face. Sometimes I could easily get upset in the matter of seconds if people don’t know how to choose the right language while communicating with me.

We both have soft sides

I’ve made a promise to myself that no matter what happens in life, I will never become a bitter person and never let life turn myself into the type of adult that I don’t want to become. I still hope that I could keep faith in life and never lose hope in love.

We have all been through our 3 month-unpaid internships!

What’s going on? It’s turned out that we have so many things in common. We all started our career overseas, both as unpaid interns, for a period of 3 months in order to experience and learn, and to become who we are today.

I started off my career in Australia as an event management student. After a year of wandering, I started to realize that I would like to picture myself working in Sales & Marketing, the area where I would be able to make the most of of my communications, creativity and event planning skills. I was told that if I wanted Sales and Marketing, I will not get paid for my internship, because I had no experience, and people would need to take their time to train me. I thought it was fine, as if it was for me to build the career that I wanted then I was more than willing to sacrifice. So 3 months as an unpaid Sales & Marketing trainee, lots of self doubt but also lots of learning from everyone around me, who was either English native speakers or from multilingual countries. I was so shy to the extent that I could barely speak a proper sentence to anyone in the team in the beginning. But it didn’t take long after for people to recognize my potentials. After 3 months of unpaid internship, I was made a Sales & Marketing coordinator for the Hyatt Hotel Canberra – A Park Hyatt Hotel, the best hotel in the Australian Capital Territory region when I was only a second year student and as an international student in a foreign land. 8 years later, this same girl became a Director of Sales and Marketing in luxury hotel sales for one of the world’s leading travel companies.

The day came when Jenny coincidentally captured a career opportunity to become a wedding planner for a wedding company in Ko Samui, Thailand.

Ain’t no roses without thorns. The beginning was tough. Jenny spent her first 3 months on unpaid work as a trade-off in order to experience and learn. After a thousand emails being sent, hundreds of small tasks taken and a few dozen of big tasks accomplished, Jenny eventually became a wedding planner by definition in Ko Samui, known as one of Southeast Asia’s top wedding destinations.

We are fully aware of our weaknesses as well as our areas of strengths.

This is how we decided to come together to achieve some of our common goals. For me I always believe that there’s nothing more powerful than having women supporting women. So after a year of getting-to-know each other and lots of recent discussions, these two self-proclaimed princesses decided to work together on something that could make an impact. I guess we’ve done the part of talking, it’s time to make things happen with our Wedding & Special Event Network Vietnam. It’s not our everything, but our something significant. Stay tuned for more updates.

In stillness, life rises ♥️
There’s no enemy inside, the enemy outside cannot hurt you.
Head on the clouds, eyes on the stars, feet on the ground 👠
If the heart wants what it wants, would it be possible that your heart and your brain still sync?
Starting with “cô ơi”, my students know how to melt my heart ♥️